Balance of trade
In the first five months of 2018, the value of exported goods from Iceland amounted to ISK 236,300 million fob and the value of imported goods amounted to ISK 299,500 million fob (ISK 319,500 million cif). Thus there was a trade deficit, calculated on fob value, of ISK 63,200 million as compared with a trade deficit of ISK 71,300 million in the first five months of 2017, at current rates of exchange.¹ The deficit of balance of trade in goods was ISK 48,400 million excluding ships and aircraft, compared with ISK 61,100 million in the same period the year before.

Imports
The total value of imports of goods in the first five months of 2018 was ISK 28,900 million higher (10.7%) than in the same period the year before, at current rates of exchange, mainly because of increased imports of fuels and aircraft investment. 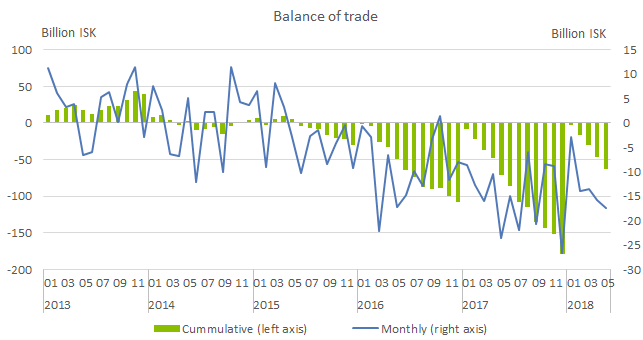 Monthly figures of external trade for current year are revised together with the release of figures for new months. Annual figures are published in the first half of the year after the end of the reference year. The figures are considered as final at that point of time.

Go back
Use of this press release is free. Please quote the source.
For further information please contact externaltrade@Statice.is, tel. +354 528 1151