One of every four to symphonic concerts last year

The sudden increase in attendance to concerts of the Iceland Symphony Orchestra in more recent years can to a large extent be explained to the opening of the concert and conference house Harpa in spring 2011 where the orchestra is housed and more than doubling of available seats for concert guests. Similar change in attendance to concerts of the North Iceland Symphony Orchestra has not occurred with the opening of the Culture House Hof in summer 2011. The obvious reason is due to the fact that the orchestra is only semi-professional and to much more limited reachable population the northern part of the country compared to the much larger market of the Iceland Symphony Orchestra in the capital region in the Southwest, where some 65 per cent of the country’s population resides.

In last year, nearly 240 thousand guests attended concerts in the three concert houses operating in Iceland. That is equivalent to seven of every ten individuals attending a concert in any of the three houses (see Figure 2). 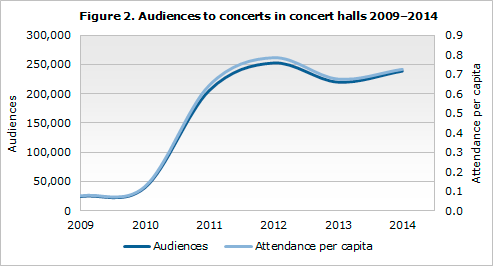 About the data
Statistics Iceland annually collects information about concerts from symphonic orchestras and music halls.